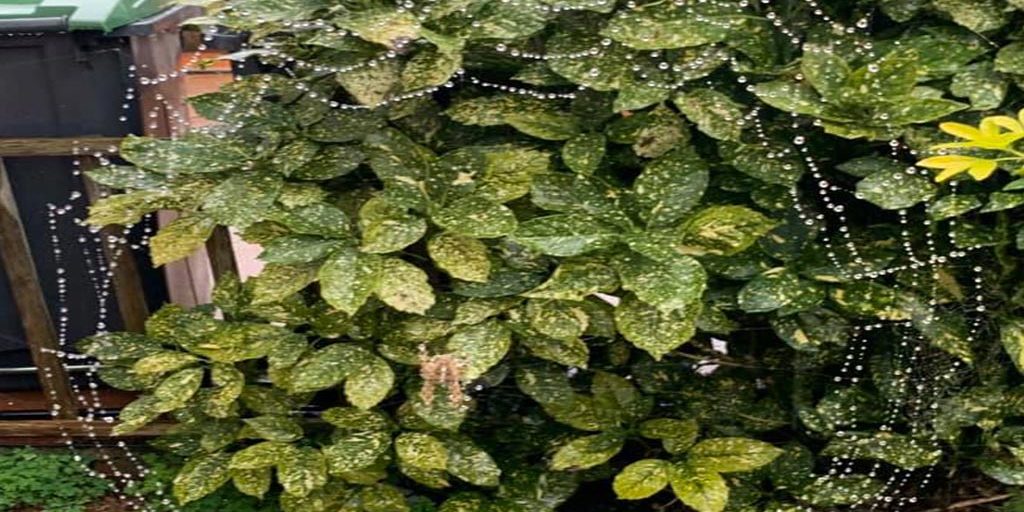 A couple of days ago I was waiting under the front porch of our house for the rain to subside. It was very heavily raining for the past few hours and as I waited I was hoping the rain would stop soon. I was looking around when I noticed something extremely unusual in the front garden. Between various trees I noticed something breathtaking. A spider had spun its giant web between several trees but the web was glistening with diamond stones!

The spider was sitting in the middle of her web. I noticed the web was shining in the rain. It appeared as if the spider had decorated the threads with precious stones. I quickly realised what had happened. The rain water had gathered in the form of droplets all over the threads of the web like small diamond stones hanging like pendants delicately and glistening in the day light. For a moment the fragile house of a spider appeared like an expensive and exquisite piece of craftsman’s handmade jewellery. It looked beautiful.

As I stood there mesmerised by the web a gush of wind vigorously shook the giant web and all the diamond pendant looking water droplets fell to the ground. Instantly the spider’s web became invisible to my eyes and her decorated home was now reduced to plain threads. All I could see was a big brown spider dangling in the air precariously, probably hoping that her hard work is not ruined.

The rain was still very heavy and I was still waiting. I felt sorry for their spider. My mind was racing with thoughts. I remembered the following verse of the Quran:

The parable of those who take [beings or forces] other than God for their protectors is that of the spider which makes for itself a house: for, behold, the frailest of all houses is the spiders house. Could they but understand this! (29:41)

In this verse God uses the parable of the frailty of a spider’s web to describe people who take others besides God as their protector. Before I explain the verse let me share with you something that caught my attention even more. God uses the famine address when referring to the web spinning spider in this verse. I wonder why it is female and not a male spider that God has referred to.

Perhaps the main reason why God chose to refer to the female spider in this verse as the web weaver is because they are God’s chosen gender for all species life sustaining and nurturing continuity. The female species have more patience in building and nurturing a home and progeny. Perhaps it is also meant to emphasise the fact that life without the female species would mean the end of life. These are my own thoughts, I could be wrong. God only knows the true reason behind it all.

However what I am not wrong is the following. Prophet Muhammad (peace be up on him) was not a scientist and there were no known scientific facts about spiders, male or female, abound at his time. That is a fact. Yet, the blessed prophet reads out these words, making such a remarkable scientific claim. If he he had authored those words he could have easily chosen a male form of the Arabic language for the spider but why be so specific and use a female linguistic form? How was that possible? How did a 6th century unlettered prophet in Arabia know such intricate details that has only become scientific knowledge in the 21st century?

The answer to these questions is easy for a Muslim – prophet Muhammad did not know this fact, he was an unlettered person, who was unable to read or write. He was simply delivering the words of God. He was the messenger and God, the originator, fashioner and designer of all species knew this information perfectly well. Prophet Muhammad did not author any words of the Quran and he delivered every word that was revealed to him as it was revealed.
Now let me get back to the spider’s web. The spider has built her house spanning a huge width and length, waiting in the middle for any insects to get caught so she could devour them. However right in front of my eyes I saw how frail her web was. All it took for the decoration of her web to fall to the ground was a gush of wind. For us humans when we build our life with material possessions, decorations and adornments, all it would take is a gush of wind to shatter our material dreams.

As I stood there I saw a little robin appear from nowhere and before I could even blink it plucked the spider from its comfortable home in its beak and flew off in the distance. In the process severed the threads that was holding the web together. All it took for the spider’s end was a little Robin’s shape beak and her home to break was for the tiny little bird’s wings to flutter through it. All it would take for our previous life to come to an abrupt end is for the angle of death to appear and pluck out our previous life from our comfortable homes. All it would take for our comfortable homes to be ruined is a small movement of the earth or a gush of wind or the a few more millimetres of rain to fall.

I felt sorry for the spider and his beautifully crafted home. Right in front of me the frailty of spiders’ web and the frailty of life were clearly made visible. The poor spider was now robin’s dinner and his home was sadly a wreckage of silk threads and spread over a few branches of a tree. The spider was dead and his house was broken in a blink of an eye.

Human beings who depart from God and rely on other powers or deities to give them protection, sustenance and comfort are like the spider who is tirelessly spinning her web but not realising how flimsy, frail and temporary her web is. For a spider her web is all she has. She invests in it, carefully crafts it, regularly attends its repair, relies on it for sustenance and lives at its centre.

When human beings built a life without God, all their investment, time, effort and energy are as flimsy as the spider’s web. An accident on the road, a viral infection in the body, a slip on wet floor inside the house, a hurricane, a flood, an earthquake or a fire could bring all the human dreams tumbling down. It could be like the spiders web, tangled metal, concrete and belongings silently offering a witness to a life that is gone.

Human beings cannot by themselves do anything without the mercy and grace of God.